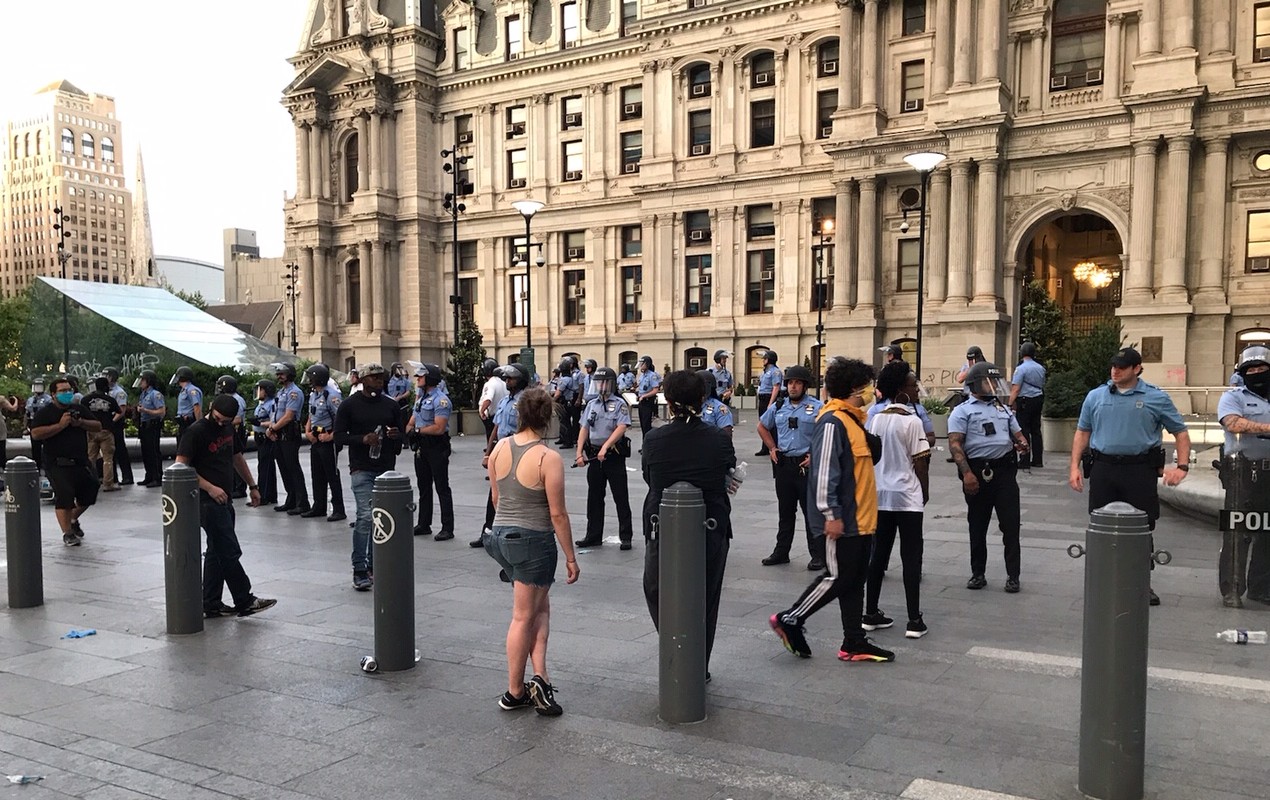 When the current protests began in Philadelphia on Saturday, May 30, something felt distinctly different from the last time I covered Black Lives Matter, which was during the Democratic National Convention in 2016. Despite everything there was optimism in the air, a belief that something real could be accomplished.

After two months of lockdown, the several hundred participants were marching together down the Ben Franklin Parkway to City Hall. Most wore masks and some distancing was in evidence, with small groupings rather than a single crowded mass. The march resounded with chants of “No justice, no peace.” At City Hall, everyone knelt in silence to honor George Floyd.

As protests against racist policing exploded across America and the world, the event offered Philadelphians of color and their allies a chance to express outrage at the horrific murder of Floyd, when a Minneapolis police officer knelt on his neck for almost nine minutes, slowly killing him on camera.

“We just want to be heard.”

But whatever arises from the protests, 2020 will go down as a dreadful year for people who are poor, homeless or addicted, for people of color and for many other vulnerable groups—nationally, and most definitely here in Philadelphia.

Poverty- and overdose-hit Kensington saw marginal incomes extinguished, drug supplies threatened, and an uptick in tensions and violence, as I reported for Filter in April.

Philadelphia’s streets felt dystopian already, with people hustling through the streets in masks. Now, government buildings, businesses and cars have burned, and different groups of protesters are split over what constitutes legitimate protest. Police have responded brutally. And there has been vigilante retaliation in some neighborhoods. I’ve been covering the ever-shifting developments non-stop for the Daily Beast since Philadelphia’s protests began. There was a unity then that now seems absent.

“This was a peaceful protest that at some point broke into two separate factions and one faction was focused on looting,” Asia Sparks, a protester who runs a group called Hands up Don’t Shoot, told me later on May 30 with tears in her eyes. “That’s not our message.”

“We just want to be heard,” she continued. “But guess what: Black men are dying at an extinction rate.”

Despite Sparks’ peaceful approach, she would later become one of the many victims of police reprisals. On Monday, June 1, she tweeted: “Peacefully protesting today & we get ambushed, blocked in, and tear gassed.” As Sparks was speaking on May 30, thick smoke rose behind her from a Starbucks that had been set ablaze. I followed the smoke around City Hall to the shopping district on Chestnut Street, and found members of the other faction Sparks had described.

“Where should we hit next?” I heard a young woman say to her friends. Almost in unison the small group responded: “Foot Locker.”

The looting I witnessed in Kensington on Sunday, May 31 represented the powder keg I previously described blowing open. It was noticeable that the people raiding stores—mostly young but of all races, and many, according to locals, not from the neighborhood—were the only ones consistently wearing masks. For most others, the masks were off.

The stores hit included Walmart and MetroPCS, but also locally owned mom-and-pop shops, up and down Kensington Avenue. Some, already struggling under lockdown, may never open again. Dozens of nearby open-air drug corners were unaffected, and continued brisk business all day. It made me wonder how the dealers felt about unfolding events—“Respect the block” is a phrase often heard here, typically as a warning not to do anything that could harm the business.

“I fucking love it,” said a young woman hawking “hard” (crack) on a popular side street.

Even the massive influx of law enforcement?

They weren’t there, but they weren’t far away. Police began assembling en masse near Kensington in the early afternoon of May 31 after the looting of a North Philadelphia Walmart. They arrived as people were carrying off electronics, clothing and other goods, and made several arrests.

Simultaneously, groups of police were making their way southward along Kensington Ave. “There’s cops in helmets everywhere,” Buck, a part-time rapper and drug dealer, told me on the phone. “Shit’s about to pop off.”

It was then that Evie and Michael Achuff, a white couple in their 20s, were beaten with metal batons after they went out to take their dog for a walk and Michael began criticizing the huge police presence. Michael said the cop assaulting him, as I reported for the Daily Beast, told him: “Hear that? We’re beating up your girl,” in what sounds like an attempt to incite him to violence. The Philadelphia Police Department has not responded to multiple requests for comment on the incident.

Most of the looting had down by the time I arrived on Kensington Avenue, but a 29-year-old woman I met showed me how information about targets was being shared on Facebook—sometimes announcing locations clear on the other side of town. Activists are split over looting; it is not comparable to the situation being protested. Still, nearly every person of color I spoke with who was not involved in the protests objected. “Protesting isn’t a code word for robbery,” a 34-year-old Black man on the subway told me on June 1. “This shit have to stop.”

“We’re still in a red zone. I am worried this will set us back.”

In Kensington on May 31, I ran into Allison Herens, the harm reduction coordinator for the Philadelphia Department of Public Health and Welfare. She was concerned about the absence of social distancing and masks amid the uprisings. “We’re still in a red zone,” she said. “I am worried this will set us back.”

By that night, residents of the working-class, predominantly white neighborhoods in South Philadelphia and Fishtown were out in force, despite the city’s announcing a mandatory 6 pm curfew. Perhaps as many as 100 white people lined the stretch of businesses along Front Street near Snyder Ave.—a traditionally Irish and Italian neighborhood.

I heard some of those residents make references to being armed, and footage from June 1 emerged of a group of dozens of white men in Fishtown carrying anything from golf clubs to sledgehammers. Journalist Jon Ehrens, who filmed them, reported that he was assaulted by the group.

The overall situation became slightly more peaceful on June 2, with the main protest group conducting a nine-minute silence to honor Floyd. But earlier that day, one of over 30 reported attempts to break into ATMs had ended in the death of a 24-year-old man who had been using an explosive device.

Deep racial and economic injustices and a connected overdose crisis were severe problems long before the coronavirus, and will outlast the search for a vaccine.

In many senses, the strife suffered by this city, and by certain neighborhoods and marginalized populations above all, looks set to continue.

Just a week previously, things were about to get a little better for those struggling under the lockdown: The city had set June 5 as its target date for dropping the coronavirus threat assessment from red to yellow. Yet deep racial and economic injustices and divisions, and a connected overdose crisis, were severe problems long before the coronavirus, and they will outlast the search for a vaccine.

Any right-minded human being has been sickened by the murder of George Floyd, and the deep-rooted, callous and systemic racism that is its context. Those are the pressing issues faced by our country, including Philadelphia.

There are signs that the worst of the violence may be over in Philly. But until systemic changes are made, it may be only a matter of time before the “shit pops off” again.

All photographs by Christopher Moraff