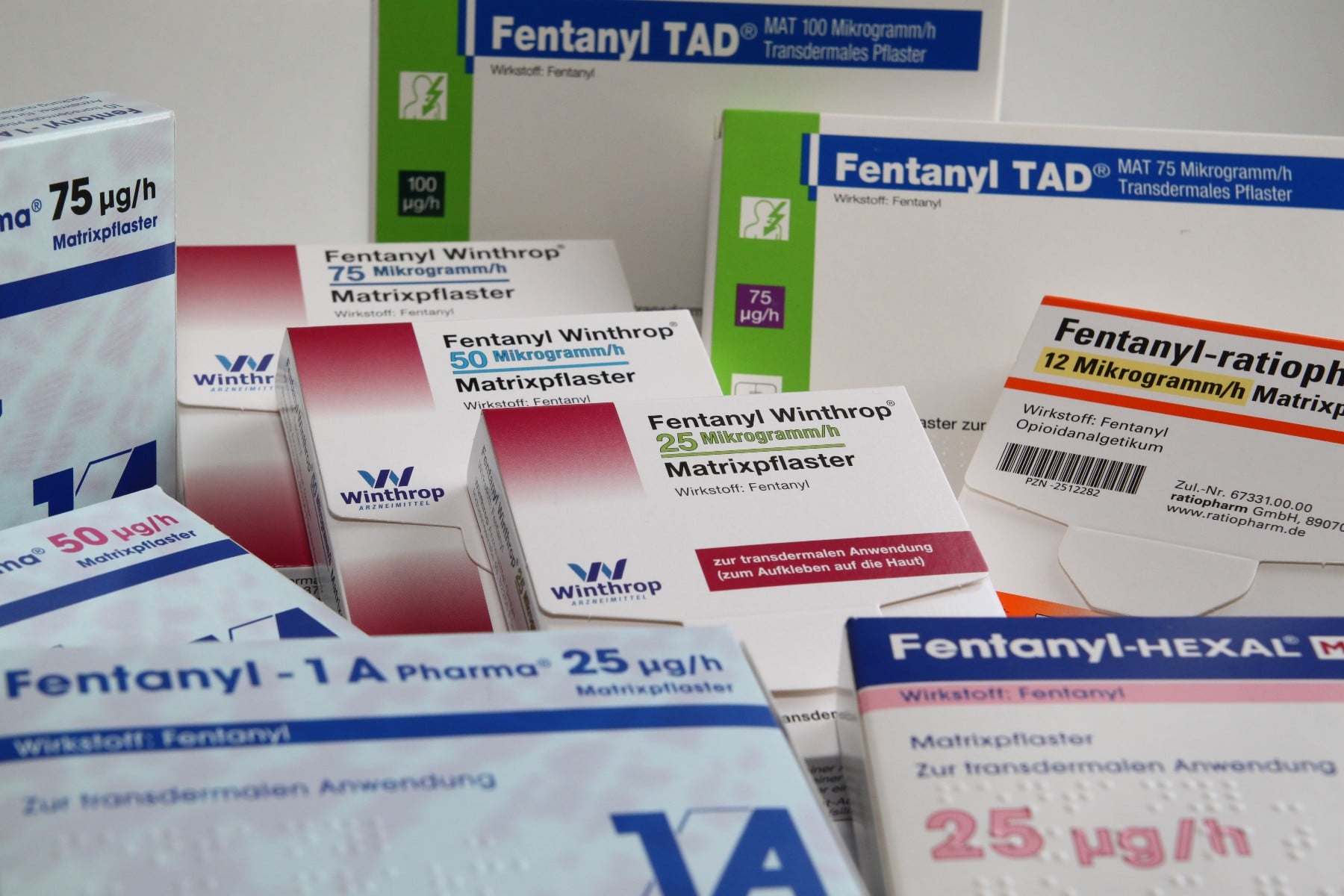 The odor of burning vinegar associated with the transdermal fentanyl patch will probably always be one of my favourite smells. To get the fentanyl from the patch, you need to do a chemical abstraction. Vinegar is not the safest method but I always found it the most effective.

You put a little bit of vinegar on the spoon and stick the patch on the spoon. When you start to cook the patch, it slowly bubbles as the fentanyl abstracts. After it has been cooked, you need to dilute it with a little water before injecting. The euphoric feeling that rushes through your body after you inject the warm burning shot is its own obvious reward.

When I first started to inject fentanyl patches roughly eight years ago, they were all over the place where I lived in Halifax, Canada. They would range in price from anywhere from 50 Canadian cents to $2 a microgram. The patches are meant to be stuck on the skin to release a certain amount of fentanyl into your body over 72 hours. The patch strengths typically went from 2.1 mg total per patch—with the patch’s time-release function meaning you get a dose of 12.5 micrograms per hour—up to 16.8 mg total, releasing 100 mcg per hour.

Illicit use by injecting, smoking or chewing eliminates the time-release function. (There is a great harm reduction document on fentanyl called “Injecting Fentanyl—Minimising the Risks.”)

I can guarantee you that no drug users were consulted in the making of this pharmaceutical industry patch program.

The main pharma company that distributes these patches here, Teva Canada, has a “Teva-Fentanyl Patch Return Program,” under which patients—a lot of times people who are dying from cancer—return their old patches in exchange for new ones. Teva’s website is filled with promotional material aimed at pharmacists, including advice on “How do I order a Teva-Fentanyl Patch Return starter kit, and how much does it cost?” This is all supposed to prevent diversion.

I can guarantee you that no drug users were consulted in the making of this pharmaceutical industry patch program. I clearly remember when the guidance became more uptight, around 2016 or 2017, and patients could no longer sell their patches or would need them back after they were cooked. In theory it seems like a great idea. In practice you are taking away a non-prescribed user’s only safe source of fentanyl.

Fentanyl has been around since long before it started making headlines for its involvement in many North American deaths. A synthetic opioid, it was first synthesised by Dr. Paul Janseen, a chemist in Belgium, in 1960. It was originally used in medicine as an intravenous analgesic, first in Europe, then in the US just a few years after. Fentanyl is now the opioid most often used intravenously for intraoperative analgesia, and has also played a crucial role for intubated patients during the coronavirus crisis.

There is an art to using fentanyl. For an opioid-dependent person like myself, 25 mcg would be a sensible shot. For someone who was opioid-naive, it would kill them.

As someone who has used fentanyl in various forms for years on and off, it boggles my mind that some people don’t realize there is a safe pharmaceutical version of it. The purity and known dosage of a pharmaceutical supply—as opposed to the countless analogues manufactured illicitly and mixed with who knows what—mean that it can be another effective tool for people who use drugs in this unprecedented syndemic.

There is an art to using fentanyl, as its properties make it tricky and dangerous for drug users to share. For an opioid-dependent person like myself, 25 mcg would be a sensible shot. For someone who was opioid-naive, it would kill them. Cutting up the patches into multiple shots creates a different potency level for each shot. So many fentanyl users are currently placed at unnecessary risk.

That’s where doctors could step in by supporting a fentanyl opioid patch program that is effective for opioid-dependent people, reliably dosed, administered with appropriate advice and resources (like naloxone, and opportunities to use with others present), and tailored to individual needs.

Actually, such a system already exists in one city: Unsurprisingly, it’s Vancouver. The city commenced the very first fentanyl patch program in June 2019. The pilot currently has 10 patients.

Dr. Christy Sutherland is the education physician lead with the British Columbia Centre on Substance Use (BCCSU), which runs the program. She is also a family doctor and diplomate of the American Board of Addiction Medicine, and works in Vancouver’s Downtown Eastside, providing care to Canada’s most vulnerable population.

As one of the innovators of the fentanyl patch program, she explained that it operates with a similar structure to the Teva one regarding returns, only it’s designed for drug users. Patches are applied to participants’ skin by nurses, with compassion and care, multiple times a week.

“The patch program is a medical intervention, but much safer than illicit drug use,” Dr. Sutherland told Filter. “One of the advantages is that it is the same drug as the illicit market, so patients don’t have to have a transition in the molecule at the same time they transition the delivery route.”

She described how her patients relate the feeling of the patch to “muscling-in” a shot instead of intravenously injecting it. With the fentanyl patches on your skin, you don’t get that rush that you would from breaking it down and injecting it. The patients’ end goal, she said, is not to have to use illicit IV drugs anymore, removing the risks of unregulated, adulterated supplies. All 10 of the patients have previously tried oral forms of opioid agonist therapy or safe supply, including methadone, buprenorphine and hydromorphone, but for different reasons found them ineffective.

Dr. Sutherland noted that the patch program is presently an “unstudied intervention. There is no published literature to support using fentanyl patches for opioid use disorder.” But she and her colleagues are aiming to put that right. Their program is being evaluated internally by the BCCSU, and they have a case study which is being submitted for publication. In a commentary published in November 2019, they reported that there were no adverse effects on the eight patients they had at the time.

What might be possible if we loosened restrictions and allowed pharmacists to run less strict fentanyl patch programs?

Asked about the program’s prospects for expansion, Dr. Sutherland said there’s a long wait-list, with the availability of nurses to dress the patches currently restricting numbers. But those lucky enough to be in the program have experienced great success, including, she said, “ending illicit drug use, spending their money on groceries and hobbies, better pain control, better mood, and better quality of life and function.”

It raises the question of what might be possible if we loosened restrictions and allowed pharmacists to run less strict fentanyl patch programs all over the world.

In a December 2019 episode of the popular drug-war podcast Crackdown, which is run by people who use drugs, Jeff Louden, one of the patch program’s participants, was interviewed by host Garth Mullins.

“We used to do fentanyl before civilians even knew what it was,” Mullins noted.

Louden talked about how he would cook a fentanyl patch before he got on the program. “Chop them up a bit, stick some lemon juice or vitamin C and off you go. And it did a hell of a lot more for me than morphine did.”

When it came to the outcomes of the program, which nurses approached him about joining late last year, Louden reiterated much of what Sutherland reported. He confirmed that the patch feels more like doing an intramuscular shot of an opioid rather than an intravenous one, and said that it sure makes fentanyl use a lot safer.

Harm reduction saves people’s lives but a safe supply will give them their life back.

Louden, who was on a fentanyl dose close to the maximum permitted by the program, explained the other benefits in clear terms: “Get back to having a life. Fucking not having to fucking grind up money continuously.”

Having enough resources to live on and not being in so much emotional or physical pain: Isn’t that what everyone tries to accomplish in life? Harm reduction saves people’s lives but a safe supply will give them their life back. Although Sutherland said, “I wouldn’t call this ‘safe supply,’ even though it is a safe medication that replaces the unsafe illicit market.”

More physicians need to step up and take the lead of Dr. Sutherland, who has been saving and transforming lives off-label for quite some time. Yes, fentanyl patch programs are more of a medical intervention than will suit some, and yes, they still need to be rigorously evaluated by academics and if necessary adjusted according to what the evidence suggests. But loosening regulations to better reflect the risk/reward ratio of such programs can surely save lives during this overdose crisis.

“Given the scope of the opioid overdose epidemic and the fact that it is largely driven by illicit fentanyl, implementation of this exploratory therapeutic approach coupled with rigorous evaluation should be an immediate priority,” stated the BCCSU academic commentary, written by Geoff Bardwell, Evan Wood and Rupinder Brar.

People who use drugs just need a regulated safe supply of whatever it is they are using, and that absolutely includes those of us who use fentanyl.