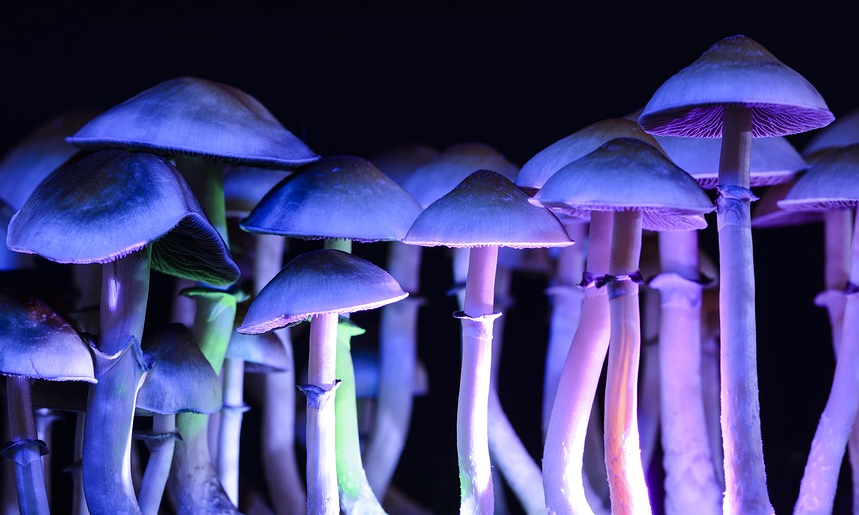 Oregon has begun a two-year process to implement its Psilocybin Services Act, making the state the first in the nation to legalize psilocybin therapy. The law—as Measure 109—was passed by voters in November 2020, with 56 percent in favor.

Psilocybin, a naturally occurring psychedelic found in hundreds of different species of mushrooms, can also be produced synthetically. Under the new law, the state government will license special providers to give the drug to patients under their supervision. Unlike with marijuana, it will not be sold directly to consumers in retail dispensaries.

The Psilocybin Services Act endorses the potential of psilocybin to treat a range of conditions—including anxiety, depression, PTSD and even substance use disorder. Though the rules are still being written, the drug will be given in controlled settings, where patients will likely be monitored while they are tripping. They won’t be able to take it home to use on their own time, as with medical marijuana.

Concerns about the legislation include that it may end up effectively still excluding certain people from receiving psilocybin. Legalizing for clinical uses only leaves barriers for low- and middle-income patients who cannot easily afford to see a psilocybin therapist. Health insurance companies are not required to cover the treatment (and likely, will not).

But the law also contains a number of better signs for widespread access—including the fact that psilocybin therapists, as defined by the bill, needn’t be licensed psychologists or psychiatrists.

It’s currently hard to know how much this therapy will cost patients, because so much depends on the specific regulations the state designs to implement the new law, but advocates are worried.

“If you’re paying a therapist $50-100 an hour, you’re looking at thousands of dollars out of pocket for folks to sit in an eight-hour mushroom trip,” Rebecca Martinez told Filter. Martinez worked on the statewide legalization campaign and is now launching her own psilocybin advocacy group in Portland. “How can we cover those costs—will we have sliding scale options and scholarships for people to access the treatment for low or no cost?”

“I’ve seen people who really want this from all walks of life and all income brackets.”

Martinez hopes that both businesses and nonprofits will help fill that void—and that ideally, the state government will help fund some form of “psilocybin equity” program. Again, regulations matter: If clinics are allowed to do group therapy, for example, that will drive down costs for individuals.

How the program works will also be impacted by who is seeking out therapy. “I’ve heard over and over that people living with PTSD want this,” said Martinez. “That includes veterans, people who survived sexual trauma, and people who have brushed with the justice system.

“If you’ve had a traumatic experience, you’re trapped in that history until you can break out of that,” she continued. “Psilocybin is unique in how it enables our brains to communicate between our memories and our emotions of trauma.” Martinez said that people with severe depression, and people nearing the end of life, have also shown huge enthusiasm.

Martinez admitted that psilocybin and other psychedelics have an unfortunate reputation of being drugs for privileged white folks, but said it’s up to everyone involved to make the program welcoming to all.

“I’ve seen people who really want this from all walks of life and all income brackets,” she said. “I’ve even spoken to Unitarian ministers who want to offer it to their parishioners because it can help heal their people. We need to help people understand that this comes from the earth, and we’re from the earth.”

How the Tide Turned

Psilocybin was used for thousands of years by indigenous peoples throughout the Americas. It was then suppressed by the Spanish during colonization, and largely forgotten by the Western world. In the 20th century, European and American scientists “discovered” the drug again in rural Mexico and first analyzed its chemical content. It’s since become widely popular with recreational users who enjoy the intense visual and psychological effects during hours-long trips.

But President Nixon responded to the growing counterculture and anti-Vietnam War movement of the 1960s—in which psychedelics played a role—by criminalizing psilocybin and other drugs with the Controlled Substances Act in 1970. A former Nixon aide acknowledged that the “War on Drugs” was designed to target “the antiwar left and black people.” The move also stifled further clinical research into psilocybin, which some scientists had begun studying by that time.

Decades later, the tide began to turn once again in favor of psychedelics. Early state-level drug reforms like the legalization of medical marijuana in California in 1996, and advances like a successful human study with the psychedelic drug DMT in 1991, helped soften public attitudes and government restrictions against psychedelic research.

A 2016 Johns Hopkins University study showed the therapeutic potential of psilocybin, and the FDA recognized on two occasions, in 2018 and 2019, that psilocybin for depression is a “breakthrough therapy” and should be fast-tracked for consideration.

Since 2012, 14 states and the District of Columbia legalized sales of marijuana for adult use, further showing that this approach to drugs could work. And at the city level, Denver, Oakland, Santa Cruz, Ann Arbor, Washington DC, and Somerville have each decriminalized psychedelics like psilocybin since 2019.

Brain scans, preparatory counseling and extensive follow-ups might be helpful to patients … but all of this is also very expensive.

Which, finally, brings us back to Oregon. The state’s groundbreaking move means that legality won’t be the problem for people seeking psilocybin therapy. But what about the logistics and the cost?

By way of illustration: In 2016, Imperial College London in Britain completed a study on psilocybin for depression, where all patients showed some relief in their symptoms after taking the drug. The form of psilocybin treatment provided was long and complex: It involved physical and mental pre-screenings, tests, brain scans and follow-up exams.

The treatment protocol included a four hour “preparation” session, two guided psilocybin trips, and an “integration” session afterwards, where patients and the doctors discussed the experience. While on the drug, patients were attended by two psychiatrists and supervised at all times by at least two staff members.

Brain scans, preparatory counseling and extensive follow-ups might be helpful to patients as well as to researchers—but all of this is also very expensive.

To what extent will Oregon see such examples as a model, rather than merely an inspiration?

What We Know So Far About Oregon’s Program

Oregon is currently in a planned two-year implementation phase for the program, before any psilocybin clinics can open their doors. As part of this, the state government has appointed an advisory board—its members were announced on March 16—to study psilocybin therapy. Between now and 2022, this board will be tasked with studying psilocybin therapy and developing regulations for the program, which will then have to be approved by the state health department.

Starting in January 2023, under the plan, the health department will begin accepting program license applications. Licenses will be issued to psilocybin therapists, to clinics, to psilocybin producers and to distributors.

Oregon will allow clinical use of both natural psilocybin mushrooms, and synthetic versions. To ensure safety, the psilocybin will have to be lab-tested for contaminants. Businesses will be forbidden from branding or marketing psilocybin products, and have to obey restrictions on broader advertising.

Psilocybin sales—which will be made to providers, not to individual patients—will be taxed. Again, you won’t be able to buy psilocybin to take home and use for yourself. At least one local psychedelic organization decided to pull its support for the Psilocybin Services Act over this omission, arguing that residents should be allowed to possess and grow their own mushrooms.

While it’s unclear how strictly regulated psilocybin therapy will be, we do know that the barriers to becoming a therapist will be relatively low. You won’t need to be a doctor, psychiatrist or psychologist to become a psilocybin therapist. The only requirements so far are a high-school education and some mandatory training—the details of which have yet to be determined.

In theory, the low barrier to becoming a psilocybin therapist could allow a more diverse group of people to become licensed providers.

Evan Segura of the Portland Psychedelic Society has some clear ideas about what the therapist training should entail. “Therapists should have done the medicine themselves, and know what it does to the brain, body and soul,” he told Filter. “Then you can walk others through it and tell them, ‘I’ve been where you are and I know you’ll be okay.’” It is difficult, however, to imagine the state requiring trainees to take the drug.

Segura himself has relevant experience as a “trip-sitter.” He stressed the training should also teach participants how to be sensitive to trauma, and to understand what can be psychologically triggering for folks. That should include material on racial and social justice, he added. “You should be able to understand where people with diverse backgrounds are coming from.”

In theory, the low barrier to becoming a psilocybin therapist could allow a more diverse group of people to become licensed providers. And if clinics don’t have to employ more credentialed therapists, that could save patients money.

And here’s another potential barrier avoided: People seeking psilocybin therapy will not need any specific medical diagnosis to qualify. Instead, adults will be able to seek therapy at their own discretion.

Therapists and clients will be required to sit for a preparation session before the trip, to discuss what the client should expect when they take the drug. Therapists will be required to offer an integration session afterwards, but it’s the client’s choice whether to take it. That could certainly cut patients’ costs. Despite her hopes for group therapy, Martinez predicted that the state will likely require individual patients to sit with either one or two therapists during their trip.

Psilocybin therapists will be forbidden from consuming the drug during a session with a client. This is notable: As Filter has reported, some underground trip-sitters consume the same drugs as their clients to try to relate to them better. But this is a highly controversial practice that is not seen in any clinical setting.

“I don’t see this as a weakness as long as the therapist has substantial past experience with psychedelics,” Segura said. “Have I used drugs with a client before and does it seem to enhance the experience? Totally. But can it also blur the boundaries and make things not as safe? I think absolutely.”

He concluded that ultimately, therapists tripping with clients would raise difficult ethical and safety concerns that Oregon shouldn’t try to tackle just yet.

“We realized you can criticize it all you want, but it’s going to happen. And it’s either not going to be accessible and affordable, or it will be.”

All eyes are now on Oregon to see exactly how the state accomplishes the historic task it has set itself. States like Hawaii and California are already considering similar reforms, but Oregon will set the example—for better or worse.

“The whole program is very easy to criticize, and I was very critical of it myself,” said Segura. “But after it passed, we realized you can criticize it all you want, but it’s going to happen. And it’s either not going to be accessible and affordable, or it will be.”

“But if it is, it’s going to take people who know how this works and care about it coming to the table and working with everyone else.”