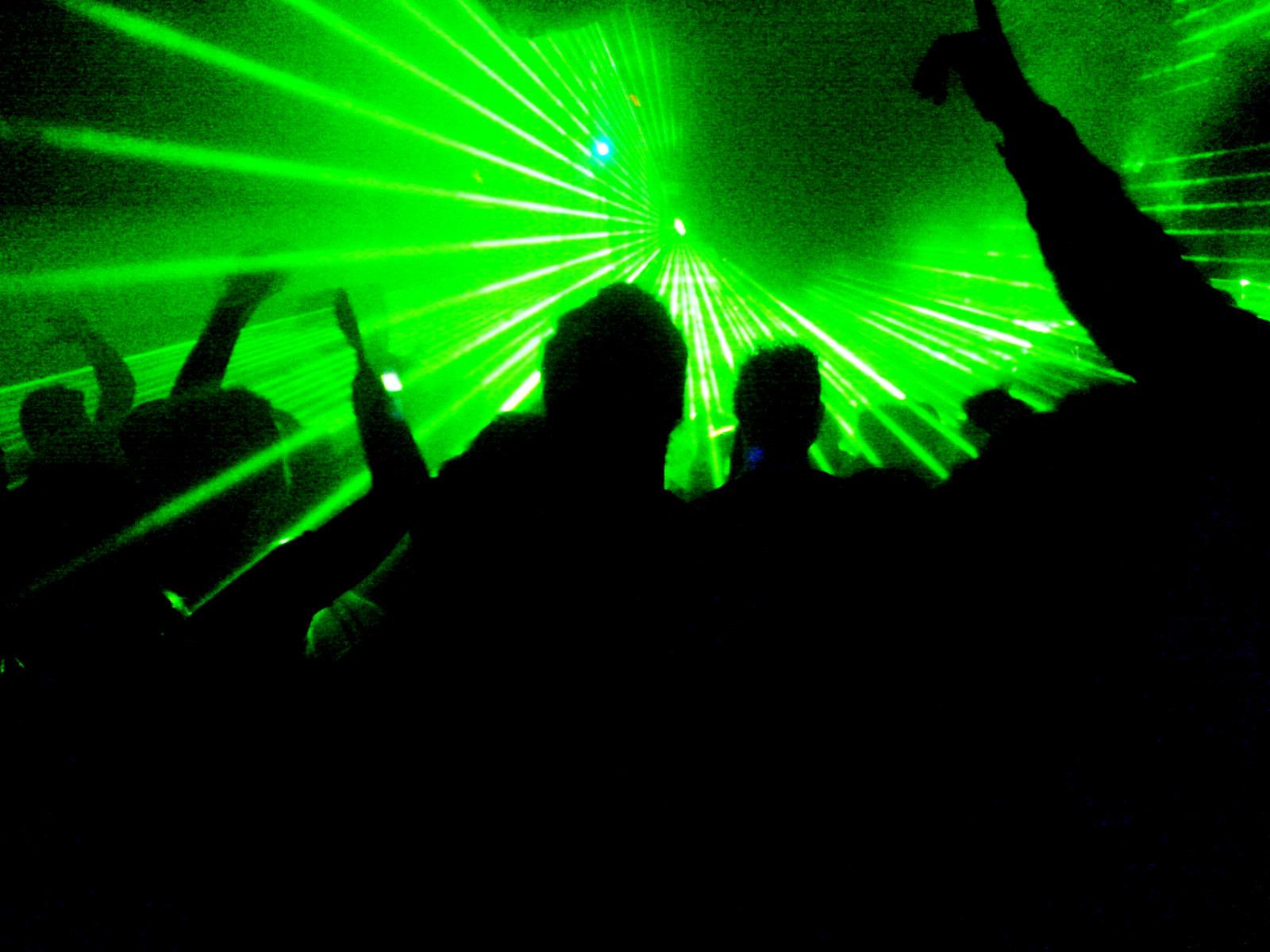 Some of us who spent a lot of time using drugs in our youth have a tendency to look back on those days as a kind of pre-adult, pre-responsibility wasteland. I was having this conversation with a friend recently, and she talked to me, rather regretfully, about her younger desires to live an edgy life and subsequent thoughtless decisions she made.

We were talking, of course, about the days when we would go clubbing here in the UK, back in the ‘90s—a scene, it still feels, like no other. We talked about the wild nights, all the money we spent on ecstasy, or E as we called it, and the successive hazy days that followed.

Where I differ from my friend is that I don’t look back at that period of my life with wistful regret. Clubbing on E changed me forever. But I don’t see those nights as wasted; on the contrary, they were filled with positive meaning that I still carry with me.

The ‘90s was the era of the superclub in England: Ministry of Sound, Fabric, The End, Turnmills and Cream. No matter the cost in time or money, we followed their glittering trail. Super fans collected their flyers and beer mats—it was a thing. A movement, it felt like. House DJs like Tall Paul, Sasha and Carl Cox acquired fanatical followings. We were listening to Goldie, Leftfield and Massive Attack, getting ready to Faithless’s Insomnia, Underworld’s Born Slippy and Liquid’s Sweet Harmony. Checklist: tickets, lip balm, water, pills.

One person in our group of friends would be in charge of getting the pills, from a friend of a friend. Mostly originating in The Netherlands at that time, they would come in all sorts of colors—speckled, pinks, blues—and a variety of shapes, such as diamonds. We referred to them with names like Superman, Apples, Mitsubishis or Doves, depending on their stamp. Some seemed better than others, though I can’t be certain that their characteristics were quite as varied as their branding, despite what the connoisseurs said!

I still look back on the first time I popped a pill as transformative.

The first time I took a pill was on New Year’s Eve in 1994. I was at a night called Funkin Pussy, in Covent Garden in London’s West End. I had just turned 20. My experience was a revelation. Yes, lots of things can feel that way when you’re just starting to feel your way around the world as an adult—it’s the ecstasy of youth and the joy of first times. But unlike many other things, I still look back—as a woman in her 40s, with a hell of a lot of life experiences behind me—on the first time I popped a pill as transformative.

It started with that rush known as “coming up.” Different people experienced it in different ways, but for me it was an overwhelming feeling of warmth and a glowing sensation that flooded my body. My friends had all taken it before me and told me what to expect; they never left me until I had come up. And then, as well as having an urge to dance to the music that inhabited me, I felt a connectedness to people that I had never felt before. I felt a surge of empathy for my fellow clubbers; it was heavenly. The rest of the night was filled with what I can only describe as ineffable joy.

There’s a real camaraderie in taking pills, a real sense of looking out for one another. None of my friends were drinking alcohol, we just made sure that we were all drinking enough water. Even strangers would ask if anyone needed water and offer you theirs.

Much is written about the club scene of the ‘90s, but little of it describes the conversations that we had with our fellow clubbers as we queued for the toilets or sat down to catch our breath. They often started in a format that will resonate with anyone who was there. What’s your name and where are you from? Followed with, What are you on?

And it was these interactions—however brief, and even if I never saw the other person again—that were the most memorable and important aspect of my clubbing days. The conversations felt profound, and stayed with me in a way that drunken chatter in pubs never has.

To take just one night among hundreds, in a gay club, I was sitting down next to a brother and sister. They were both gay, and in their 20s. They started to tell me about the reaction their parents had to the “double-whammy” of their coming out just recently. It had been rather easy in the end, they said. Their parents pissed them off one day and they’d just blurted it out, and it went ok.

We bonded over each other’s tales of overcoming adversity. “Love seems to be punished more than hate,” the sister said. We talked about how clubbing made us feel free. A gift of vulnerability had been exchanged and we thanked each other for it, kissed goodbye and disappeared into a steaming mishmash of people.

Nights like these represented, to me, a glimpse into what we are without our armor: vulnerable, communicative, hopeful and a little bit messy.

On the same night I got chatting to a Jamaican man who had come to the club with a gay friend. He was straight, and told me, in a questioning way, that he just didn’t know any Jamaican men who were out as gay. He spoke thoughtfully about notions of masculinity within his culture. As he got up to leave, I felt an urge to thank him for talking to me so kindly and openly, so I did.

He sat back down and looked at me rather curiously. “Why wouldn’t I be kind and open? I think you’re really lovely and I’ve enjoyed your company.” And it was that simple. There was no complication or even flirtation, just an exchange of honest words from one stranger to another.

Nights like these represented, to me, a glimpse into what we are without our armor: vulnerable, communicative, hopeful and a little bit messy.

Dr. Matthew Baggott is a neuroscientist and long-time psychedelics researcher, who in 2016 published a study on the socio-emotional effects of MDMA, the active ingredient in ecstasy. “MDMA temporarily decreases neuroticism and self-criticism,” he told me when I asked about my experiences. “This makes it easier to think about and talk about things that really matter to us.”

That certainly rang true, but it felt like more than that to me. Under the influence of E, conversations all seemed to be coming from a place of empathy, with our best characteristics at the forefront. Clubbing became a place where people solidified their commonalities. What was behind that?

“When we can interact with people without being self-critical and neurotic, it becomes easier to really connect with them,” Dr. Baggott explained. ”It is as if the brain power that is normally used for monitoring yourself is freed up to pay attention to the conversation. Instead of feeling altered and less like themselves on MDMA, people often feel more able to express their true selves and more able to be their true selves.”

The Contrast With a Drug War at Its Peak

Such uplifting experiences could not have contrasted more starkly with a drug war that was at its peak in the 1990s.

High-profile events fueled this. The name of Leah Betts will be familiar to anyone who was clubbing in the UK at that time. She died in 1995; after taking an ecstasy pill, she rapidly consumed about 7 liters of water before falling into a coma from which she never recovered. The harm reduction advice to ravers when taking E was to drink plenty of water to avoid dehydration when dancing. But Betts wasn’t in a club environment; she was at home, celebrating her 18th birthday.

Her photograph subsequently appeared on countless billboards across the country in an anti-drug campaign. “Sorted,” the posters read. “Just one ecstasy tablet took Leah Betts.”

In 1997, with Leah Betts still all over the media, singer Brian Harvey was famously fired from the popular English boy band East 17. Claiming in an interview to have taken 12 pills in one night, he described ecstasy as a “safe” drug that “increases the love between people.”

Even over a decade later, in 2009, renowned neuropsychopharmacologist David Nutt, who went on to found Drug Science, was fired as the British government’s chief drug adviser, for “comments which damage efforts to give the public clear messages about the dangers of drugs.” Prof. Nutt had written that as far as relative risks go, “There is not much difference between horse-riding and ecstasy.”

So why were we dropping Apples, Doves and Mitsubishis at a time when outcry and law enforcement against ecstasy were at their most brutal? Because we flocked to these nights wanting to be disarmed. Because the effects were gloriously exquisite. Because we were having the most sublime conversations imbued with astonishing veracity, in a culture that held together our joint frailty. Because we could feel the love.

“There’s something compelling about people being unapologetically themselves. People seem to blossom.”

“In addition to changes in how people feel and behave, I think there are also often changes in how people on MDMA are perceived by others,” Dr. Baggott said. “At modest doses where side effects like jaw and eye movement don’t occur, MDMA can lend a magnetic quality to the user. There’s something compelling about people being unapologetically themselves. People seem to blossom.”

E was part of my life throughout my 20s, particularly during my university years. I used it less frequently as I got older, perhaps just every few months. And as I grew into my 30s, with different priorities in life, those days came to an organic end.

I have always been a curious and sometimes loquacious person, so I won’t say E ushered me out of my shell. I have always led an open life. So E did not introduce me to myself. What it did was show me another existence. A place where people cared for each other, reached out to one another, shared their problems and empathized, with house music as the backdrop.

To this day, when I hear a snatch of the music I was clubbing to, it takes me right back. Sometimes, the feeling is so strong that I actually feel like I’m “coming up” again—firmly back in that time and place of my past. It makes me smile.

But above all, I often think back to the conversations I had in the clubs. I feel a fuller and better person from having had them. I am still inspired, in my writing and in my wider life. My youth was not “wasted.” E lifted a curtain and I received what I consider great insight into humanity—into the universal vulnerability beneath our exteriors, injected with hope.

Photograph of Fabric in 2005 by Fabio Venni via Flickr/Creative Commons 2.0