Two landmark reports about drugs and harm reduction have been released in the past few weeks: Regulation: The Responsible Control of Drugs by the Global Commission on Drug Policy, the organization of former world leaders; and No Fire, No Smoke: The Global State of Tobacco Harm Reduction by Harry Shapiro on behalf of Knowledge-Action-Change, a health agency associated with the Global Forum on Nicotine.

Put them both on your must-reads list. The report by the Global Commission is the latest in a series published annually since 2011, while the report on tobacco harm reduction (to which I contributed as a key informant) is the first of its kind.

Both are grounded in the principles of harm reduction and human rights, and the acceptance that a drug-free world is a fantasy. Each confronts a common set of problems:

“Tobacco harm reduction has travelled a separate but parallel road to drugs, sex and alcohol harm reduction,” notes Shapiro. “There might be some as yet unexplored synergies: Michael Russell, [a leading tobacco researcher] for example, started his work at the Addiction Research Unit at the Institute of Psychiatry in London at the same time that the unit was researching heroin prescribing as a way of reducing risks for heroin users.”

No Fire, No Smoke

No Fire, No Smoke is global in scope and stunningly comprehensive. Charts, graphs, maps and infographics present smoking and vaping prevalence data as well as the legal and regulatory status of e-cigarettes in dozens of countries. Its central ideas are that:

2. These products need to be widely available and affordable in order to save millions of smokers’ lives the world over.

3. Unfortunately, these products have instead been subjected to massive amounts of “flawed science, misleading public information and sensational media reporting…sowing seeds of doubt.”

Shapiro takes on critics of SNP by marshalling international scientific evidence that these products dramatically reduce harm. In a related section of the report, he examines the problems with research into SNP, and the biases of academic journals and the peer review process. He includes a much-needed research evaluation checklist for those who conduct SNP research.

There is also a fascinating primer on the invention and evolution of electronic cigarettes, tobacco heating systems and snus. Two powerful case studies included in the report–Japan, with the introduction of heat-not-burn products; and Sweden, with widespread snus use–show how rates of smoking and mortality can decline dramatically and fast.

Powerful testimonies by vapers and other SNP consumers also give lie to the idea that SNP don’t help people of all ages to quit smoking. The report acknowledges, “The rapid rise in the use of SNP has been driven by consumer demand, often in the face of public health or government opposition.”

No Fire, No Smoke’s recommendations are of enormous importance to global public health, considering that over seven million people die from smoking-related disease annually. Despite this, the report has gotten no high-impact press coverage. Why? The usual reasons apply: perceptions of Big Tobacco involvement, exemplified by a recent inaccurate hit-piece in the New York Times, and lack of urgency in addressing suffering of overwhelmingly poor and marginalized populations.

No Fire, No Smoke was released to coincide with the World Health Organization (WHO) Conference of the Parties in Geneva, where the Framework Convention for Tobacco Control (FCTC) was discussed and updated. The report should have been at the heart of those talks.

Instead, supporters of tobacco harm reduction, many of whom were refused entrance to the sessions, stood outside the building and handed out copies to participants. Yet the ideas in the report will have far more impact than the WHO discussions in reducing tobacco-related deaths in the years ahead. 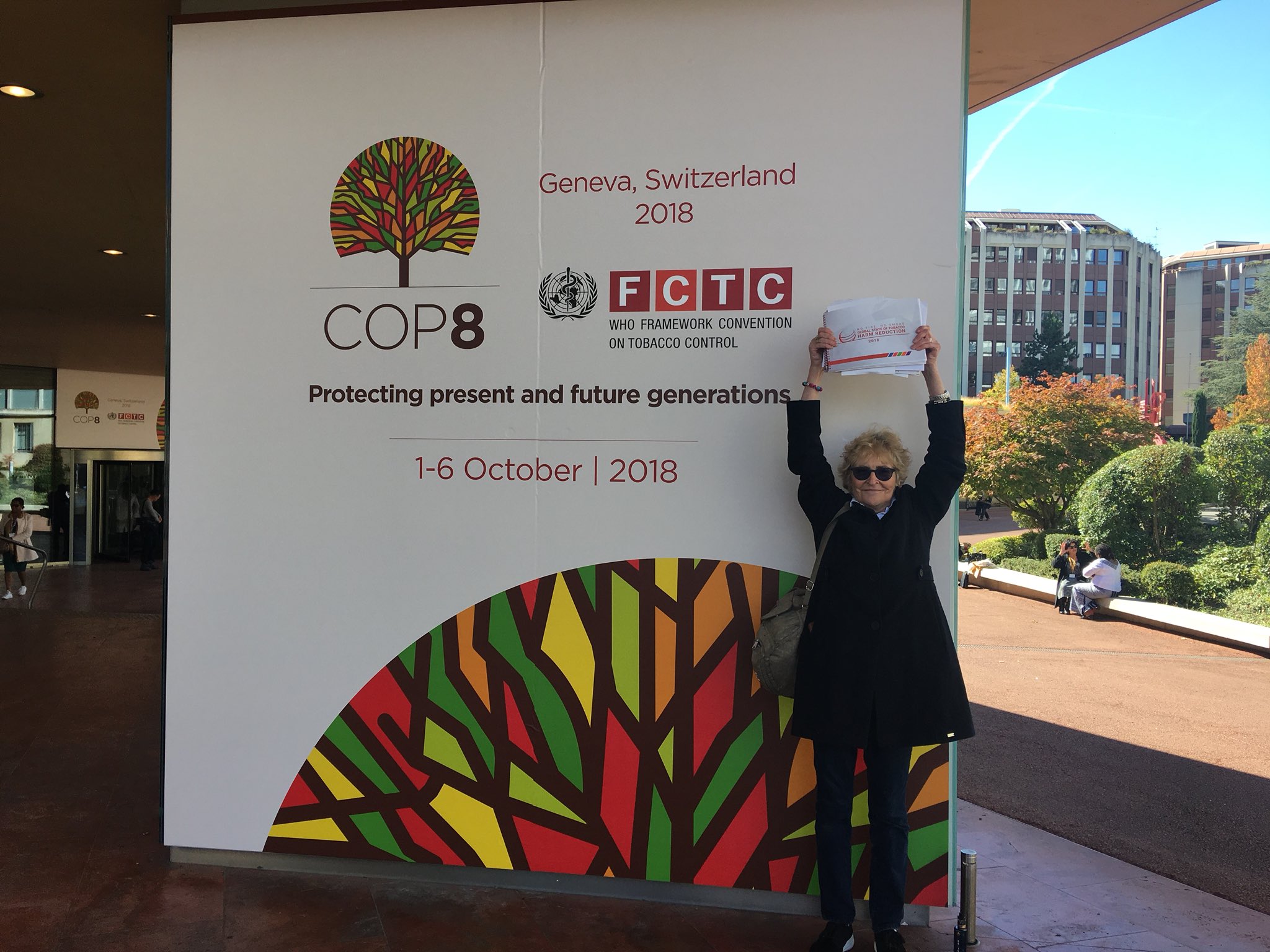 [Judy Gibson of the International Network of Nicotine Consumer Organizations (INNCO) holds up No Fire, No Smoke outside the WHO gathering in Geneva last week. Photo viaJeannie Cameron.]

Regulation: The Responsible Control of Drugs

Reports from the Global Commission on Drug Policy are notable for their remarkable clarity, common sense, and cutting-edge policy recommendations.

The commission comprises former presidents from Brazil to Nigeria and former UN officials who don’t care that their recommendations threaten an obsolete and irrelevant international drug control system of prohibition and punishment. Years ago, they came out in support of regulating (legalizing) drug markets, heroin-assisted treatment, safer consumption sites, abolition of the death penalty for drug-law violations and opposition to drug courts.

Regulation: The Responsible Control of Drugs begins with this statement:

“The regulation of drugs–often misrepresented as uncontrolled liberalization–is best understood as a form of responsible risk management by governments. It moves control of drugs from unregulated criminal markets to appropriate government agencies. There is no ‘one size fits all’ approach to this transition from prohibition to legal regulation: each country or jurisdiction will have to design a strategy fit to its own circumstances.”

See what I mean about clarity?

The report goes on to lay out how to achieve regulation of all drugs with this critically important proviso: The public must be involved in a democratic process where evidence and options are discussed with them, and their preferences are given serious weight.

The report outlines five models of drug regulation that already exist and can be adapted to fit different cultural, political and economic conditions:

1. Medical prescription: Heroin, methadone, buprenorphine can be prescribed by qualified healthcare providers to drug users and picked up in pharmacies, or for example, in heroin-assisted treatment day clinics in Switzerland.

2. Specialist pharmacy: This is one of the models adopted for retail sales of cannabis in Uruguay. Pharmacists dispense the drug to people who meet certain criteria.

3. Licensed retail: Businesses with a license can sell drugs in accordance with conditions that can include controls on price, marketing, sales to minors, and mandated health and safety information on product packaging. Cannabis retail stores in Colorado follow this model. Alcohol is also regulated in this way in many US states and other countries.

5. Unlicensed retail: Drug products such as coffee or coca tea require little or no licensing, just quality control measures. (I would add nicotine products to this category.)

These models of regulation can eliminate the “Iron law of Prohibition” and many other harms, including mass incarceration.

Regulation: The Responsible Control of Drugs also addresses the very real risks of over-commercialization, and the need to “balance the profound tensions between the interests of public health (to moderate risky drug use and minimize health harms) and of commercial entities selling drugs (to maximize sales and profits).”

Its suggested alternatives to unfettered capitalism include:

* state monopoly control of part or all of the market

I do have two criticisms of the report. First, it should have included a section on tobacco harm reduction: Smoking tobacco kills more people than all other drugs combined. Models of regulating safer nicotine devices, both harmful and helpful, are being debated and proposed in most countries, and an intervention from the Global Commission would have been timely.

Their report includes a small section on the successful regulation of tobacco, referencing the FCTC, and states, “It is no coincidence that the regulatory approaches advocated by the World Health Organization (WHO) in many key respects, mirror those now being proposed for other drugs by the Global Commission on Drug Policy…” But in practice, the WHO doesn’t support tobacco harm reduction and instead advocates complete nicotine abstinence.

The second criticism is around the timeline for implementing new regulatory reforms. The report states, “…reform is likely to be a cautious and incremental process under any scenario.”

The  Global Commission should push harder to reject this glacial pace of change. The global war on drug users has for decades driven horrific violence and mass overdose. Many millions have been incarcerated. In this disaster scenario, cautious and incremental won’t cut it.

Nevertheless, to those of us who believe in human rights, dignity and justice for all drug users no matter what drug they use, Regulation: The Responsible Control of Drugs and No Fire, No Smoke—are indispensable resources in ending the War on Drugs.