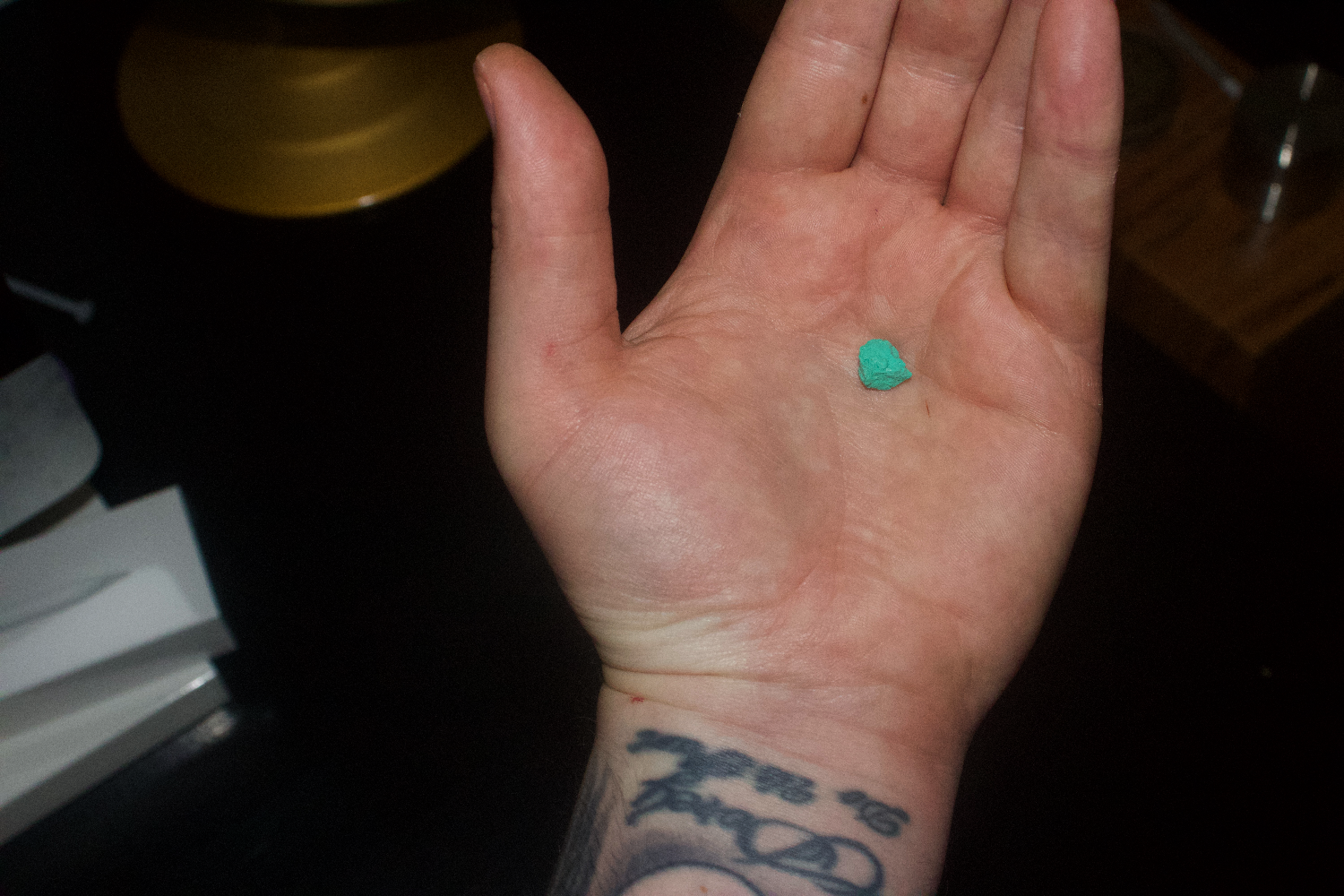 Atlantic Canada often seems to get left out of discussions of our country’s ongoing drug-poisoning crisis. Yet recorded overdose deaths in Nova Scotia alone increased to almost 100 last year. Society continues to brush them off, while people who use opioids and other drugs are denied effective treatment and left to try unregulated “down,” AKA fentanyl.

The perception that only a select few consumers in this region seek out fentanyl may have been true for a while—but no longer. Having been one of them for the longest time—although I’m currently on sabbatical, taking time to recover and trying to be the best version of myself—I’ve been documenting our supply and my experiences with it.

We drug users on the east coast must protect ourselves.

I’m not seeking to glorify any of this fent that has been in town. But policymakers, health officials and—most importantly—people who use drugs need to know what is around. We had two deaths from blotter paper in the summer that supposedly contained etizolam and a synthetic opioid, yet still have no formal drug checking services for our entire region.

We drug users on the east coast must protect ourselves, spread the word, send our drugs away to be tested, order test strips, virtually spot one another when using, and keep begging our doctors for a safe supply—even if that rarely works. We need a progressive and comprehensive drug strategy, led by us and for us.

Like all of us, I am much more than a current or former fentanyl user. I’m an advocate, a journalist, an academic researcher, a brother and a son. But by sharing my personal experiences, I hope to encourage more people to be open and not have to use their fentanyl alone.

Here are some of the forms of fentanyl I have consumed, before and during COVID-19. We need a safe supply of all drugs, including fentanyl for people who seek it. Then, and only then, will we stop losing lives. Fentanyl patches are the safest form of fentanyl around here—because the contents and dosage are known—and yet the hardest to find. They are very rarely prescribed and when they are, people usually are either in palliative care or they are not getting rid of them.

The best thing about patches is that you can stick them on you, chew or suck on them, smoke them, or prepare them to inject. You can also cut them into pieces for smaller doses, although there’s risk there: If you cut a patch in two, one side may contain more than the other.

I knew right there and then that I was in love with that sensation.

I’ve been doing them since 2012; it’s how I started using fentanyl. There were a lot around back then, but now you are lucky to know one person you can deal with. I remember the first time well. After I injected it, it gave me a rush that felt like a full-body orgasm, and then knocked me out for a couple hours. I knew right there and then that I was in love with that sensation.

The first overdose I responded to was also because of a patch. It was long before naloxone was locally available. Thank God, we knew CPR and EMS was super-quick.

This form of fentanyl hit the scene in Halifax, where I live, from around 2015 to 2018. It was in pill form: basically fake Oxy 80s. The Halifax version, unlike in some other parts of Canada, was these light-blueish pills that did not look anything like real Oxy 80s. But they sure as hell were fentanyl, and were they ever good.

This stuff had a reputation that didn’t match the effect; it barely even touched a drug user with my tolerance. Sub-par at best. After trying it a few years ago, I didn’t mess around with this stuff at all—but that doesn’t mean someone without an opioid tolerance wouldn’t end up overdosing on it.

The police put out a warning about this; I guess the appearance was catchy. But it had nothing like the strength of the other stuff that started coming around. We certainly have a steadier supply of potent “down” on the east coast now. Now this type of fentanyl was knocking us down like flies. This was the supply on which I overdosed back in 2020. I don’t remember a thing; it certainly didn’t inflict any pain. There is literally nothing in my memory from dropping to being revived. When I sniffed that line, I could taste the potency. It reminded me of the Shady 80s, just a ton stronger.

I was lucky to survive, unlike many others. The person who sold it to me cut me off after they found out I overdosed. Despite their common reputation as evil sociopaths, people who sell drugs are some of the kindest and most compassionate I know—and I’ve met some of the highest people in the game on the east coast. No one wants to make anyone die on their supply; why would they? It’s our politicians who have forced the unregulated market to become as dangerous as it has. This was around before the pandemic, and it felt like a dream for some fentanyl users. At first it was strong, and there were quite a few overdoses. Then sellers figured out exactly how to cut it, and people got along with it fine. It was like injecting love into your veins; it felt like being the version of yourself that you like.

It was even fairly cheap for a minute, going down to about CA$30 a point on any amount. But then of course supply gets scarce, and people start stomping on it with cuts they shouldn’t. Simple economics kicks in when the demand outweighs the supply, pushing prices back up. It lasted for a while, but it never seems like anything is sustainable in our local market. About halfway through this year I found a new source, the best guy I have ever dealt with. What’s more, he had practically sold everything—and he had the purest red fentanyl I ever tried. In my opinion, it was simply the best dope I have experienced.

I speculated that this new guy was ordering directly from some pretty high-level contacts. Either way, it was a product that blew me away, and I was quite upset when it was gone, After the red stuff was gone, a new type of purple hit the scene. I was the only connection for it, and it was a type of dope I was wishing for and regretting all at the same time. I remember doing the first shot—it was so powerful I had to get up and walk back and forth for fear of slipping into an overdose. As soon as I shot it, I knew I got a batch of what has been killing people: benzodope, basically fentanyl or a fentanyl analogue cut with non-medical or synthetic benzodiazepines—a high-risk combination.

Then all of a sudden, during a binge, I had to reverse three overdoses from this supply.

Luckily I have a high tolerance of benzos, which might just have kept me alive. I couldn’t get enough. Then all of a sudden, during a binge, I had to reverse three overdoses from this supply.

The first one, a guy smoked the tiniest piece, and needed repeated naloxone. The second two happened back-to-back. One was a seasoned user; I thought she died, but I pulled it together to provide rescue breathing, yet she still wasn’t coming through. She was breathing, and paramedics gave her a naloxone drip, but she didn’t wake up. She was wheeled out to the ambulance in a stretcher. She lived, barely.

The third overdose was a close friend and even more experienced. There wasn’t enough naloxone, but once again I gave mouth-to-mouth until first responders arrived at the scene. Thank God we have our Good Samaritan Act, or he might not be here and I might be in jail.

The impacts of that dope were what made me seek help, to stop using for now—and maybe indefinitely.

All photographs by Matthew Bonn