A student-led nonprofit in Columbus, Ohio, has created a smartphone app that helps community members report “bad batches” of drugs and shares information on harm reduction resources in the area.

The SOAR Columbus app was launched in November 2020 by the SOAR Initiative, a harm reduction organization run by Ohio State University students. The app is available on the Apple App Store and Google Play Store, and received funding from the city’s public health department.

After first checking a box to verify that they are not a law enforcement officer, app users can sign up for “Deadly Batch” email or text alerts whenever a concerning batch of drugs is reported in Columbus or its suburbs. They can also view a color-coded map displaying locations in the area that provide harm reduction supplies like syringes, naloxone, drug-checking strips and HIV and hepatitis C testing.

“Really, the system was designed with the idea of people helping people, so we want this to be very grassroots,” said SOAR Executive Director Pranav Padmanabhan, a junior at OSU studying geography and public health.

The app’s genesis was a few SOAR members starting to volunteer at Safe Point, a Columbus syringe service program. Collectively, they realized that was “a gap between the existing public health and harm reduction services, and reaching a lot of the population of people who actually use drugs,” Padmanabhan told Filter.

The group’s other initiatives are accessible to people who don’t have smartphones.

The SOAR team looked to Baltimore’s Bad Batch Alert text messaging system for inspiration. They also drew on the work of Brave Co-Op, which builds technological services to alert responders to overdoses near them, with a presence in both Vancouver and Columbus.

The SOAR Columbus app supplements the group’s other initiatives to support people who use drugs, which are accessible to people who don’t have smartphones. Before the app’s development, the group sent out alerts from Columbus Public Health and the coroner’s office via SMS text messaging. They’ll continue to do so. The organization also distributes fentanyl test strips in-person and is working to distribute them by mail. 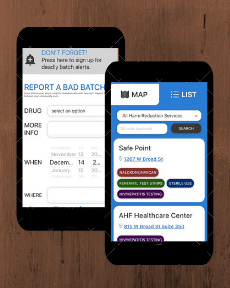 SOAR’s members describe their greatest challenge in developing the app as producing something that people who use drugs would trust and want to use. They ran multiple focus groups to ensure that the app’s design would fit the needs of their targeted audience, said Joey Esposito, a sophomore majoring in data analytics and the app’s back-end developer.

SOAR performed extensive outreach to harm reduction providers in the area in order to create its built-in map, and made sure that the app’s technological aspects were ethical and aligned with the mission of serving people who use drugs. Esposito said that the team is proud to store users’ data securely and to not collect any unnecessary data.

Kate Luckerman, a sophomore studying computer and information science who is the app’s front-end developer, agreed that the group’s “biggest challenge is constantly trying to keep in mind how we can best serve the interests of our audience and prioritize a relationship of mutual trust through something so distant and hands-off as an app.” The app does not require its users to be tech-savvy.

SOAR hopes to expand its reach to other cities across Ohio. The group has already set up a number with a Cleveland area code to which people can text “SOAR” to sign up for Deadly Batch alerts. Their next step is to create a similar app that can serve Cleveland, which they hope to debut this spring.

“It’s actually not too difficult to set up the system in the first place,” Padmanabhan said. “So now it’s all about just maintaining the systems and spreading out and building the connections with the community and building the trust. “

SOAR’s planned expansion to Cleveland is personally meaningful to Esposito, whose family has been affected by opioid issues. “I would love to see this app serve the same use for them and help them in the ways I’ve seen it help people in Franklin County,” he said.

He added that he’d like to advance SOAR’s overall mission of convincing people who doubt the value of harm reduction to embrace it. “The main thing that we want to do as an organization is change the minds of these people, so that … we can hopefully move towards helping users in a way that is more productive, in a way that makes sense, in a way that we treat them as people and not as potential fatalities.”

Photographs courtesy of the SOAR Initiative