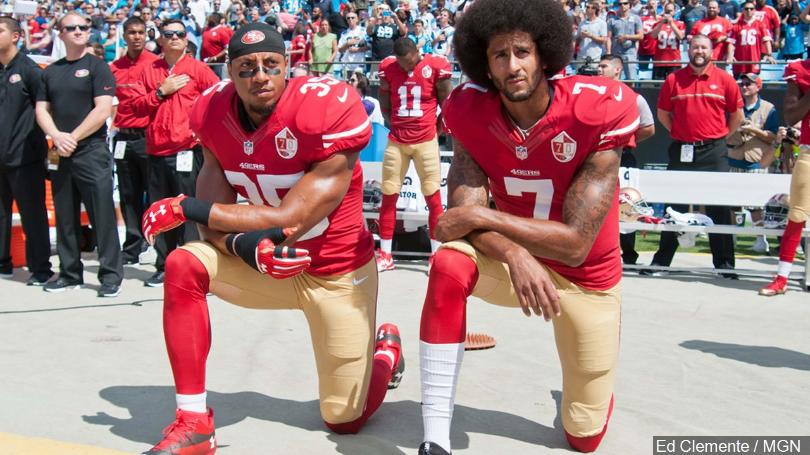 Eric Reid, an NFL player known for protesting police violence against Black communities alongside Colin Kaepernick, has been repeatedly drug tested to a point that many on social media are calling “harassment.”

The former San Francisco 49er took to Twitter to call into question the seventh “random” drug test he has been selected for within the 11 weeks he’s been a member of the Carolina Panthers.

One of the seven tests was mandatory, as part of his annual physical. But the other six tests have raised concerns about possible retaliation for his participation in an ongoing protest that involves kneeling during the national anthem.

According to NFL policy, 10 players from each team—all supposedly chosen at random by a computer—are tested each week of the season. The Panthers host a roster of 72 players. Yahoo! Sports calculated the statistical probability of Reid’s drug testing pattern given this policy:

“Using a cumulative binomial probability calculator, those numbers work out to a 0.17 percent chance of Reid getting randomly selected at least six times in 11 chances, according to the NFL’s rules. That’s a 1-in-588 chance. Reid would have a better chance at correctly guessing a coin flip nine times in a row.”

Reid and Kaepernick “came to the conclusion that we should kneel, rather than sit… during the anthem as a peaceful protest,” wrote Reid in a New York Times op-ed last year. “We chose to kneel because it’s a respectful gesture. I remember thinking our posture was like a flag flown at half-mast to mark a tragedy.”

But these protests have come under fire by President Trump, among others, for being “disrespect[ful].” And Reid faces opposition, or at least apathy, from other NFL players like Malcom Jenkins, who have asked him to end his protests. Since leaving the San Francisco 49ers on his own terms in March 2017, Kaepernick has remained unsigned by an NFL team, leading him to file a lawsuit accusing the league of conspiring to keep him off the field.

This is not the first time we’ve seen drug testing of a fishy nature in the world of sports. Deadspin reported this past summer that tennis player Serena Williams had been drug tested more than any other professional women’s tennis player as of June, marking a total of five tests within the year. Williams tweeted that she believed (racial) discrimination was at the heart of the “random” testing.

The cause of Reid’s improbable string of testings is unconfirmed. And Reid remains committed to his politics. Just before the game night that would end in a discouraging drug testing note being slipped into his locker, Reid shared a photo of his cleats that featured his commitment to protest:

My cleats for tonight. Much thanks and appreciation to the artist @2cent_bmike. Here’s his take on the inspiration behind his design, “It’s a tribute to the history of protest , centered around the quote “if not us , who? If not now, when? “ meaning we all benefit and stand on… pic.twitter.com/x9PNkmwTK0