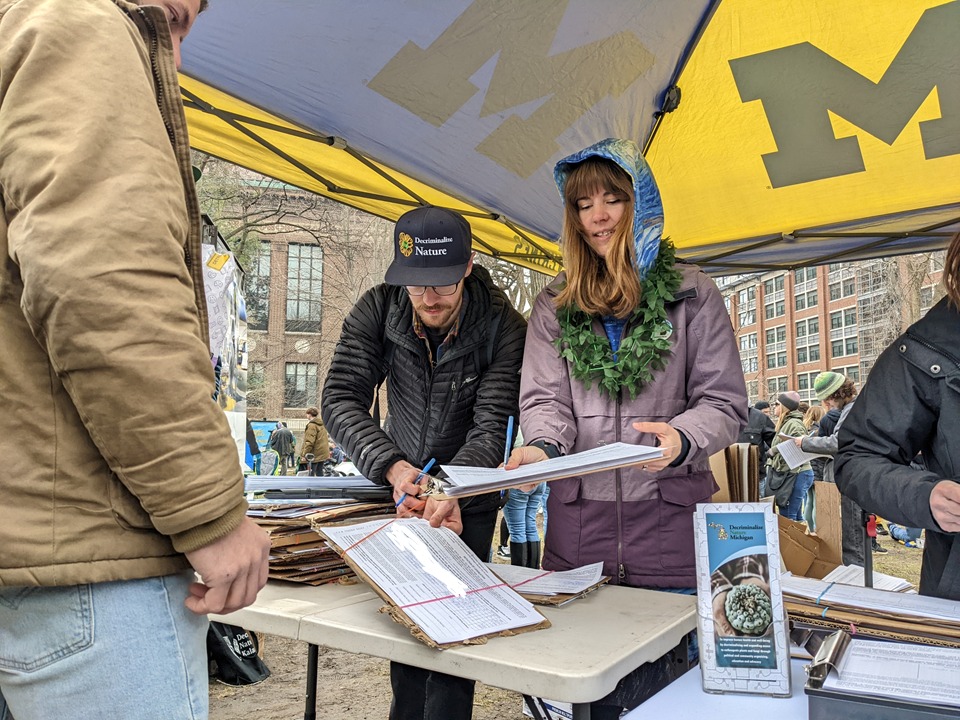 Activists in Michigan are hitting the streets to make their state the first to decriminalize possession of psychedelic drugs. Despite the difficulties of running a statewide ballot initiative, they’re confident their bid will unite voters of all ages and persuasions—and end in victory.

Michigan state officials certified the “Michigan Initiative for Community Healing” on March 28. Activists must now gather 340,000 valid signatures by June 1. If they succeed, the initiative will be put on the ballot for voters to decide on election day, November 8.

The initiative would amend Michigan’s health code to decriminalize use, possession, cultivation, production, and sharing of naturally-occurring psychedelics—including psilocybin, ibogaine, mescaline, and dimethyltryptamine (DMT). It would also allow doctors to recommend psychedelics to their patients, and medical and religious entities could produce, sell or administer the substances for therapeutic or spiritual use. Those who provide support for psychedelic users—including “trip sitters” and guides—could charge for their services.

The initiative also has several non-psychedelic components. It would reduce penalties, from felony to misdemeanor, for possession of up to 1,000 grams of all other illegal drugs. It would cap penalties to no more than one year in prison or a $1,000 fine. It would also exempt drug checking tools—like fentanyl strips—from drug “paraphernalia” charges, and limit such charges overall. And its “Good Samaritan” component would protect people from drug charges who call 911 in event of an overdose emergency.

Michigan’s role at the forefront of the psychedelic reform movement might surprise people who haven’t been following recent events. Trump narrowly won the state in the 2016 presidential election, before it went Blue again in 2020. But city-level initiatives have brought momentum. In September 2020, the Ann Arbor City Council voted unanimously to decriminalize naturally-occurring psychedelics (and a new campaign there seeks to decriminalize possession and low-level distribution of all drugs). A year later, Detroit’s voters approved a similar measure. And on March 22, 2022, the city council of Hazel Park voted unanimously to do the same.

Nothing should be taken for granted, however, and gathering the required voter signatures will require hard work. To be valid, each signer must be a registered voter and enter the correct mailing address where they are registered to vote. Voters must correctly date when they signed the form—a common mistake is to put their birthdate instead. Any of these small errors will invalidate their signature.

“We have a fantastic team of experienced organizers as well as a tremendously active volunteer team,” Myc Williams, co-director of Decriminalize Nature Michigan, told Filter. His organization is co-sponsoring the psychedelic initiative with Students for Sensible Drug Policy (SSDP).

One strategy is to target student voters in the state’s college towns.

“We had about 50 volunteers just this past weekend at Hash Bash and collected a few thousand signatures in one day,” Williams added. But assuming that about 29 percent of signatures will be rejected, he estimated the campaign actually needs to collect 540,000 to stand a chance.

Psychedelic organizers have several strategies in mind. One of those is to target student voters in the state’s college towns. Normally, towns like Allendale or Big Rapids have small populations, and lean heavily conservative and Republican. But during the school year, legions of young people double or even triple those populations.

Williams explained that students coming from out-of-town and even out-of-state need to register to vote at their on-campus address if their signatures are to count.

“They’re residents there two-thirds of the year, so they have more stake in being a voter where they spend more time than back home in Ohio or wherever,” he said. “For college towns, that’s key to swinging that county … You can swing an entire vote, and we saw that in 2018 with cannabis.”

But organizers must also carry the biggest cities in the state—among them Detroit, Flint, Lansing and Grand Rapids—to get the initiative over the line. Midterm elections for Congress, and local elections including the governor’s race, should help bring out more voters.

“We have the advantage that this is a non-partisan issue.”

“With all these cities you’re at over half the vote for this state—if you can win those cities, you have the state,” Williams said. “Detroit voted on this issue in November and won by 61 percent in an off-year election. We expect turnout to be even better … I think we can take this with 65 percent or better.”

Even outside of major metros like Detroit, or liberal-leaning college towns like Ann Arbor, Williams is confident that the psychedelic initiative will appeal to a wide swath of voters, no matter their political leanings.

“We have the advantage that this is a non-partisan issue,” he said. “Libertarians, Republicans, Democrats are all coming to bat for us. The amount of benefits for veterans or police officers with PTSD, the advantages for mental health, and the cognitive liberty is huge. We’ve got something to pull in every direction and we’re trying not to make this a partisan battle.”